Can I sue the council for a pothole accident?

I have previously dealt with several injury claims for cyclists.

In each case, the front wheel of the bicycle went down a pothole in the road.

I recently acted on behalf of an art student in London. 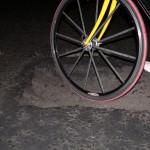 He was cycling home one evening after football practice with some friends.

His journey home took him past a supermarket, down an access road, and onto a main road named Hanover Park, where he had to give way.

Exactly at the spot where the double white lines marked the junction with the main road, the front wheel of his bicycle suddenly went down a large pothole.

Despite the size of the pothole (please click to expand the photos), the local council had done nothing to guard the defect, or draw attention to it in any way.

My client was thrown over the handlebars of his bicycle, and onto the road surface.

As a result, he suffered a dislocated elbow. An ambulance took him to hospital. 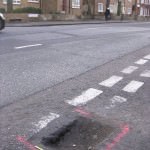 The accident came at a particularly awkward time. My client was in the final year of his degree course, part of which involved creating sculptures.

Because of his injury, he was unable to sculpt.

I made a claim against the local council for failing to fix the pothole.

They denied liability, saying that the road was not their responsibility.

The local council blamed the supermarket, which they said owned the access road.

So I redirected the claim against the supermarket, Morrisons.

Title deeds were produced by Morrisons’ solicitors, showing that they did not own the section of roadway where the pothole was located. 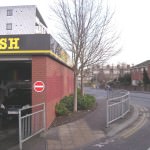 Faced with a denial of liability from both potential defendants, preparations were made to start court proceedings.

But at the last minute, the local council made a complete about-face and conceded liability for the pothole.

To see the feedback provided by the client in this case, please click here.

In the next case, my client was a web content manager and SEO specialist.

On the night of the accident he was cycling home from a club at Elephant and Castle.

A friend of his from Australia was doing a live show there.

The time was about 2am. My client was in no particular hurry to get home. He was cycling at normal speed. 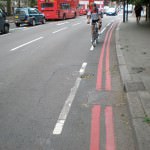 Without warning, the front wheel of his bicycle struck a pothole in the road. My client was thrown over the handlebars.

The accident happened at the top of Brixton Road, where it curves past Kennington Park.

The precise spot is near some trees. At night there is no artificial lighting nearby. Because of this, the pothole was less obvious.

My client lay on the ground for about 30 seconds, before he got up and salvaged his bicycle.

A couple of cars slowed down, presumably to offer assistance. But my client waved them away, not realising at first that he was injured. 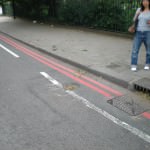 Upon picking up his bicycle, my client realised that his right wrist was badly hurt.

Somehow or other he managed to ride most of the way home, cycling one-handed.

Changing gear however was impossible, because this requires the right hand.

He arrived home at about 2:45 a.m. He put on ice on his wrist, but it was obvious that he had a serious injury.

Because of this, he woke up his flatmate and she took him to Accident and Emergency at King’s College Hospital.

At hospital, an x-ray revealed that his wrist was fractured. The hospital staff applied a splint. 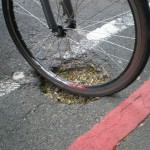 The client contacted me. Before anything else, I suggested that he should take photographs.

So he returned to the scene of the accident with his flatmate. They photographed the pothole from all directions.

Unexpected assistance was received from a passing cyclist. He helpfully placed the front wheel of his bicycle in the pothole, give an idea of the scale.

After that, I sent a letter of claim to the London Borough of Lambeth. They referred the matter to their loss adjusters.

The loss adjusters rejected the claim. They alleged that they had an adequate system of inspection, and so there was nothing more they could have done.

The loss adjusters also produced a witness statement from the actual highway inspector responsible for checking the roadway. 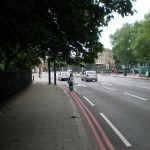 According to his statement, no pothole was visible on the dates when he inspected.

Documents were disclosed to confirm this. But close inspection of the documents revealed that the final inspection was just 3 days after the accident.

Faced with this evidence, it was highly unlikely that the inspection had been undertaken diligently.

As a result, the loss adjusters agreed to meet 50% of the claim.

We rejected this and issued court proceedings.

The local authority then transferred the conduct of the claim to their solicitors. The latter served a Defence denying liability and alleging contributory negligence. 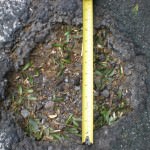 Furthermore the solicitors tried to argue that, based on the measurements accompanying the photographs, the area of the pothole was less than 100 square centimetres, and this fell outside the council’s intervention levels.

Dusting down my schoolboy knowledge of trigonometry, the same measurements revealed that the pothole in fact had an area of 706.95 centimetres.

Further correspondence then ensued, about whether the above calculations were correct.

Next the council’s solicitors focused upon the medical records, clearly trying to prove that the client was drunk at the time. Again, this line of objection led nowhere.

Finally with allocation questionnaires about to be filed, the opponents advanced reasonable settlement proposals and these were accepted.

To see the feedback provided by the client in this case, please click here. 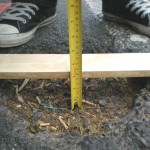 In my opinion, this case is yet another example of how local authorities often fail to deal sensibly with an entirely justifiable pothole accident claim.

Instead of making a prompt admission of fault, the local authority preferred to argue ceaselessly.

Ultimately the only result was an escalation of legal costs, which the local authority had to pay.

I look forward to hearing from you.