I previously acted for a Romanian labourer. 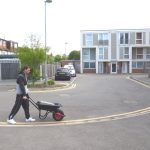 He was working for a construction firm, on a building site in West London.

At the site, a new housing estate was being constructed.

The work was at an advanced stage. All the roadways within the housing estate had already been tarmacked.

At that stage, the site manager then realised that there was a problem with some of the kerbstones.

To explain this, at the entrance to one of the parking bays, “drop kerbs” should have been installed, to allow cars to drive in and out easily. 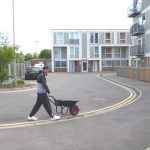 Instead, normal kerbstones had been installed.  These needed to be replaced.

Due to the weight of kerbstones, an excavator is normally used to transport them.

The difficulty was, an excavator would have destroyed the fresh tarmac.

To get round the problem, my client’s boss ordered him to remove the kerbstones using a wheelbarrow.

While pushing the wheelbarrow loaded with kerbstones, my client suffered severe back pain. 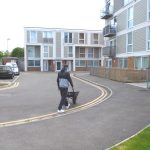 As result he collapsed on the ground.  He went to hospital.  The medical records contained an exact description of what had happened.

We claimed compensation for his back injury, against the employers.

Surprisingly, the employers denied all knowledge of the accident.

Bizarrely, the employers later alleged that my client’s back injury was caused by a co-worker, after giving him a “huge bear hug”.

My client described this allegation as “surreal”. 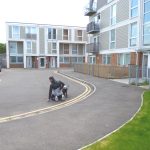 With the assistance of an interpreter, we decided to return to the same place, to stage a reconstruction.

By now, 3 years had gone past since the accident. The completed housing estate was now surrounded by security fencing, with a keypad entry system.

We purchased a wheelbarrow from a nearby DIY superstore.

After that, we entered the housing estate, which was shoehorned into a long, narrow piece of land.

Using the wheelbarrow, the client then re-enacted his exact sequence of movements leading to his collapse. 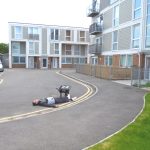 We showed the resultant photographs to the other side.

However, they continued to deny all responsibility for the accident.

As a result, the claim proceeded to trial, at the County Court at Central London.

At trial, the other side’s witnesses were mumbling and monosyllabic. At one stage, the judge had to tell them to the answer the questions properly.

In complete contrast, my client spoke clearly and decisively. He never once changed his version of events.

The judge decided that my client was the more convincing.

I remember this case mainly because of the bizarre version of events that the other side put forward, to avoid paying compensation.

I found it incredible that they were prepared to repeat these falsehoods, even in front of a judge.

Back injury compensation
To discuss your possible claim, please call me today, on 0845 021 2222
Thanks for visiting, Boris Kremer