Home » Case Examples » Compensation for back injury after laying floors

Many of my clients have back injuries, following accidents at work.

One such client was in Bristol. He was working as a flooring contractor.

Before the accident, my client had been a floor layer all his working life. He began doing this work aged 17. 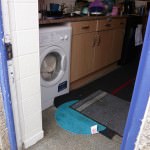 To begin with, my client served an apprenticeship for 3 years. After that he became a self-employed flooring subcontractor.

For several years, my client ran his own flooring business. But eventually this ran into financial difficulties.

He then decided to join a large company, which fitted new flooring in council houses around the Bristol area.

The system of arranging the work

A housing association normally has a schedule of periodic repairs in respect of each house. Flooring would be included in this.

An inspector from the housing association would visit the house in question to assess the floor. If the floor needed replacing, then the inspector would contact the company. 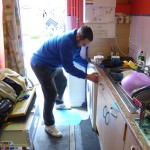 The company would then send their own measurer and afterwards prepare a quotation, which would go to the housing association.

After that, the company would contact the person living in the house and agree a date for the repairs.

Quite often a complete new kitchen or bathroom would be required.

If so, then various different tradesmen trades would all have to attend.

These would include a kitchen fitter, plasterer, painter and so on. The flooring would always be done last.

In a typical day, my client would do two kitchens and one bathroom on average.

Before fitting the new floor in kitchens, my client had to move everything out of the way.

This included moving washing machines, fridges, freezers, dishwashers, cookers and so on. 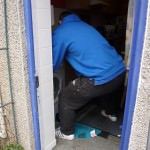 As far as electric cookers were concerned, these were permanently wired to an electric point on the wall, so could not be unplugged.

For this reason my client had to physically pick up the electric cooker and place this on the worktop, so that it could remain connected throughout.

Electric cookers were awkward to pick up, and frequently slippery, as a result of accumulated cooking oil.

Furthermore my client had to pick them up and put the cookers down carefully, to avoid them becoming damaged.

As far as dishwashers were concerned, these were heavy and awkward, and frequently filled with dishes.

As regards the washing machines, these were particularly heavy, because they are weighted at the bottom.

No manual handling training was provided. 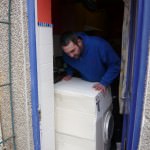 To avoid back injury compensation claims, the company provided a sack trolley. However many of the council houses were chaotic inside.

This meant it was not always possible for the sack trolley to be used.

In the months leading to the accident, my client started to experience twinges of back pain.

On the day of the accident, my client was laying a floor in the kitchen of a small terrace house in Bristol, located in a narrow, steeply sloping street.

When my client arrived at the house, all the other trades had finished their work. He simply had to fit the floor.

The inside of the house was piled high with rubbish. A couple was living there, together with some teenage children.

At the back of the house was a narrow kitchen. The washing machine was located close to the back door. 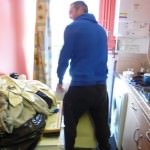 Before laying the new floor, my client had to move the washing machine out of the way.

Because of the layout of the kitchen, his only option was to remove the washing machine out through the back door.

Leading from the back door into the back garden was a step down of roughly 9 inches.

To begin with, my client jiggled the washing machine forwards, and away from the wall. He then jiggled it as close as possible to the back door.

After that, he lifted the washing machine over the threshold and out of the house.

So as not to damage the washing machine, he had to pick up and place it down carefully. 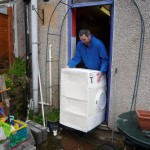 In the process, my client felt a paralysing pain in his buttock and leg. He literally collapsed on the floor and was unable to stand up.

My client lay on the floor for 10 minutes, unable to move. The lady living there asked if he was all right. She helped him to his feet.

After that he completed the job.

When he returned to the depot, he reported the accident verbally to the contracts manager.

The back injury compensation claim

Originally the client instructed a compensation lawyer in Bristol.

However the opposing solicitors denied liability. They said there was no record of the accident.

Faced with this refusal, my client’s original solicitors advised that his claim was unlikely to succeed.

He therefore hunted on the internet for a new lawyer willing to continue his back injury compensation claim.

We spoke on the telephone and I advised that to turn the situation around, we needed photographic evidence. In particular, we needed to stage a photographic reconstruction. 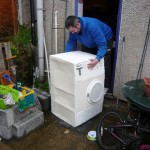 This in turn required a washing machine. For this purpose, the client agreed to construct a full-scale model washing machine out of wood and cardboard.

Once the client had done this, I visited him in Bristol, and we drove to the house where the accident had happened.

The lady living there was a dinner lady at a nearby school.

She agreed to let us into the house, carrying the cardboard washing machine with us.

Once inside, I was appalled by the chaos and the smell. Rubbish was everywhere.

We carried the cardboard washing machine into the kitchen.

Using the cardboard washing machine, the client then re-enacted his exact sequence of movements on the day of the accident. 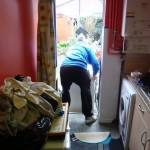 As he did so, I took a sequence of photographs.

The lady living there also kindly provided a statement, confirming that the accident had taken place.

Faced with this photographic evidence, the opposing solicitors agreed to pay compensation, and we went on to win the case.

The client was pleased to receive compensation for his back injury.