I have previously dealt with several back injury compensation claims. I describe some case studies below. Please click the accompanying images to expand them.

In this case, the client worked as a saw operator.

His employers were a firm of stonemasons, and their business was located in a yard in Sheffield. 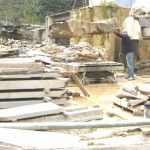 The client was required to operate an electric saw, as shown in the attached photograph.

The photograph shows a large piece of stone being placed onto a trolley using a crane. The electric saw would remove offcuts, and these would fall to the ground.

The client then had to retrieve these offcuts, and carry them to a pile roughly 30 metres away.

I took the attached photographs during a site visit. As can be seen from the photographs, the yard was very untidy. The client had to tread carefully through mounds of debris, while carrying the heavy pieces of stone.

Furthermore the floor area around the electric saw was ankle deep in slurry, being a mixture of water and ground stone particles.

Another aspect of his work was to deliver individual pieces of stonework around the Sheffield area, for garden rockeries. The client did this unassisted, using a van.

As a result of doing this work, the client had suffered several previous minor episodes of back trouble, although nothing significant.

Matters escalated when the client was required to help deliver a pair of large stone pinnacles.

In the process he felt his back “click”, and he felt extreme back pain. 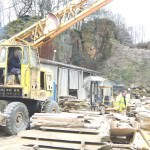 A couple of weeks afterwards the client was lying on his sofa watching television. When he tried to get up, his back locked completely, and he was unable to move.

An ambulance took the client to the Northern General Hospital in Sheffield, where a prolapsed disc was diagnosed.

About a year afterwards, the client sadly died on holiday in Bulgaria, as a result of matters unrelated.

I put forward a back injury compensation claim.

Furthermore they strenuously denied that he ever had to lift anything excessive. 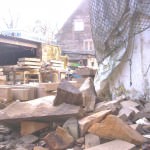 Finally they alleged that the client never made any complaint about back trouble at the time, and the true cause of his back injury was unrelated to his work.

Our expert confirmed that the back injury was indeed work-related.

The other side’s expert said that the delay between the accident and the onset of symptoms was significant, which meant that some other factor was the cause.

Our orthopaedic surgeon was unconcerned by the delay, as it was only a fortnight.

He commented that in his experience as a surgeon, he had seen many previous cases where the disc prolapse occurred some while after the traumatic event.

As long as the time interval was no longer than 2 or 3 weeks, then one could say that the two events were connected.

In this case the client was a gas fitter.

On the day of the accident, he and a colleague were working at an industrial estate in Warwick, where they had to install a gas pipe. 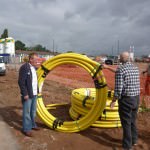 Their normal procedure was to dig a trench, and then place the gas pipe at the bottom of the trench, before filling the trench in again.

But on this occasion the job was different because it involved pushing the gas pipe into a very long underground duct.

There were 3 unusually difficult features of the job.

Firstly the duct was 72 metres long, with a kink halfway along.

Secondly the gas pipe was coiled, and the coil was restrained with steel bands. The two men had to contain the coiled pipe from springing open.

Normally a pipe trailer would be provided, which comprises a winding drum, mounted on small trailer. This is intended to support the weight of the coiled pipe and allow the the men to unwind just as much gas pipe as they needed.

But on the day of the incident, no pipe trailer was available.

Thirdly, in order to access the end of the duct, my client had to dig a hole in the ground, next to the wall of the premises. As a result of this, he was working in a very restricted space.

As the two men struggled with the coiled pipe, the owner of the premises felt compelled to help. He said: “You shouldn’t be doing this, in this day and age”.

While doing this task, the client injured his back.

I put forward a back injury compensation claim against the employers. They denied all responsibility. 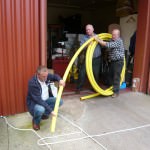 So as to get photographs, we decided to stage a reconstruction. Luckily a length of coiled gas pipe still remained discarded in a corner of the industrial estate.

Using a length of white rope, we marked the position of the hole in the ground in which the client had been standing, and this is shown on the photographs.

Nearby, a large housing estate was being constructed, on what used to be the site of the Humber car factory.

On site were some identical coils of gas pipe. The site manager kindly gave permission for these to be photographed, at these contained warning notices showing that coiled pipes were dangerous and needed to be contained. 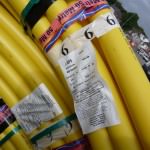 The litigation continued and the opponents continued to deny all liability. It was likely that the claim would run as far as trial.

Unexpectedly the uncoopertive solicitor conducting the claim went on paternity leave. This led to a more senior colleague taking over the claim.

Shortly afterwards the opponents had a complete change of heart. They put forward a substantial offer, and settlement was achieved soon afterwards.

In this case the client was an excavator driver from Bristol. He suffered a serious back injury in an accident at work.

The accident took place at Swindon College, in Wiltshire. Construction work was taking place to expand the college.

The client drove a 13 ton excavator, as shown on the attached photographs that the client took with his mobile phone after the accident. Under construction was a part of the site known as “the workshop”. This was going to be the college craft area.

Apart from inside the site office, there was no artificial lighting on site. 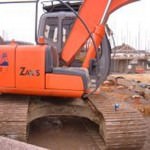 Each evening, my client parked his excavator at the spot where he had finished working. Next morning, he would resume working in the same place.

Vandalism was a major problem on the site.

So to prevent damage from vandals, the client had to fix security shutters to the outside of the excavator each evening.

The next morning, the client had to remove the security shutters one by one, and store these in a special container fitted to the outside of the cab.

On the day before the accident, the client had been operating his excavator at a remote corner of the site.

Early the next morning, when he arrived for work, it was pitch dark. The illumination from the site office did not reach as far as where the excavator was parked.

The platform of the excavator was roughly 7-8 feet above the ground. The client walked around the platform, removing each of the 5 security shutters.

While doing so, his left foot got caught on a metal stud, protruding from the floor of the platform. 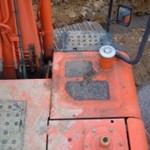 The client fell, landing on one of the tracks of the excavator.

At first, he only experienced a dull aching. He got into his cab and tried to resume working.

But the pain did not improve. After a couple of days, he realised he had suffered a serious back injury.

I advanced a back injury compensation claim against the employers, who admitted blame almost immediately.

These investigations revealed that the client was suffering from a pre-existing, although “clinically silent”, back condition.

In this case the opposing insurers and their solicitors were very helpful and co-operative. They made a succession of interim payments, and we eventually negotiated sensible compensation for his back injury.

A back injury can have devastating consequences. Clients sometimes report the following difficulties:

In truth, the stress of making a compensation claim can compound the other problems.

With some back injuries, the onset of pain develops gradually.

In such cases, the injury can develop incrementally, which can lead to the injured person’s back being vulnerable to a sudden breakdown.

If so, then it can just take a minor incident for the back to break down completely.

I have previously concluded successful back injury compensation claims, where the “final straw” has been:

What is the legal limit a person should lift at work?

Under the Regulations, there are guidelines (although not mandatory limits) on the maximum safe weight.

The Regulations contain a “lifting and lowering” diagram. Please click on the image to expand it and see the full version. 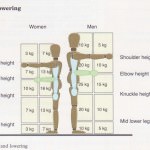 As can be seen, the recommended maximum weight that a man should be required to lift from head height, close to his body, is 10 kg.

If a man is lifting an object from ankle height, but away from his body, the maximum is 5 kg.

If a man is required to lift something from chest height, but close to his body, then the maximum permissible weight is 20 kg.

Under the Regulations, there are different recommendations in respect of men and women.

The maximum recommended weight that a woman should lift is roughly 30% less than that of a man.

It is not illegal if you have to lift heavier weights than those shown on the diagram.

But if you do, then your employer must show that he took adequate steps to minimise the risk of injury.

Such steps could include:

The maximum safe weight varies, depending on the situation.

If the lift involves twisting through 45°, then the safe maximum weight is reduced by 10%.

If there is repetitive lifting, then the safe maximum weight can be reduced by 30%.

In a typical back injury claim, the opponent is generally one of the big “household name” insurance companies.

Insurance companies make strenuous efforts in TV advertising to show themselves as being “cuddly” and “approachable”.

But when fighting them in a back injury compensation claim, they reveal a very different side of their nature.

The following tactics are often encountered:

Generally speaking, insurance companies will try their hardest to avoid paying compensation in a back injury claim, if they possibly can.

Role of the solicitor

In my experience, back injury compensation claims require a certain type of approach.

Effective tactics include the following:

Especially where lengthy medical investigations and treatment are required, the claim can sometimes continue for several years.

Thanks for visiting. I look forward to hearing from you.