One of my cases involved a Lithuanian client, who suffered a back injury. 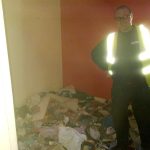 His job involved installing security shutters at a housing estate in Middlesbrough.

The housing estate was a crime hotspot.

Gangs of youths would roam the estate, committing acts of vandalism.

Many of the houses on the estate had been badly damaged, and were abandoned.

To try to prevent matters getting worse, the local council had instructed a specialist security firm.

That firm was instructed to install metal security shutters, to prevent unauthorised people from entering the abandoned houses. 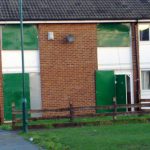 The security shutters were designed to cover the doors and windows.

Due to the weight, lifting and installing the security shutters was a 2-man job.

My client and his colleague, both Lithuanians, were given the task to fit these shutters.

The men were given targets. Each day, a certain number of these security shutters had to be installed.

As an added difficulty, many of the houses on the estate was surrounded by slippery rubbish.

One of the houses had been used as a drugs den. The accompanying photographs, taken by my client, show the indescribably filthy conditions inside. 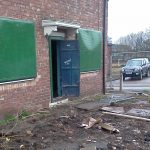 To make matters even worse, the local youths on the estate would often harass my client and his colleague, while they were trying to do their job.

Ideally, my client and his colleague should have been able to park their van near each house. However in reality this was not always possible.

Furthermore the company failed to provide the men with a trolley, for transporting the security shutters on site.

As a result my client and his colleague had to carry the security shutters manually.

My client became injured while he and his colleague were carrying one of the very heavy metal doors from their van to one of the vandalised houses.

He felt a sharp pain in his back, but he tried to continue working, hoping that the pain would improve. 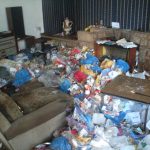 But a couple of hours later, while sitting in the van on the way home, the pain in his back became far worse.

I made a back injury claim against the employer, and they denied responsibility.

They alleged that they had done a proper risk assessment for this task.

Therefore they said they had no intention of paying compensation.

However on closer examination, the risk assessment was inadequate, as it did not take into account the dangerous and anti-social conditions in which my client was working.

Faced with the denial of liability, we began court proceedings.

The company’s insurers agreed to pay compensation as soon afterwards. 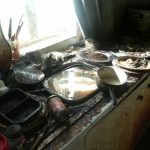 I felt sorry for this client.

He came to the UK to start a new life.

But he returned to Lithuania injured, disillusioned, and with a very unsavoury view of the UK.

His photographs are an eloquent testimony to the depravity of some people.

Back injury claim
To discuss your possible claim, please call me today, on 0845 021 2222 Thanks for visiting, Boris Kremer