I have previously dealt with several back injury compensation claims and would like to describe a recent example.

My client in this case was a Polish man, named Krzysztof. 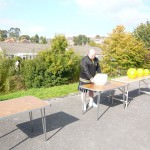 Before coming to live in England, Krzysztof worked as a security guard. Before that, he was a sniper in the Polish Army.

Through an agency, Krzysztof found employment at a cheese factory in south west England.

His job there was production line operator.

At the factory there were about 80 employees, working in 3 shifts.

Employed at the factory was a mixture of foreign nationalities, with large numbers of Poles and Portuguese.

Blocks of cheese emerged from an arch, on a conveyor belt.

Each block of cheese weighed about 20 kg. 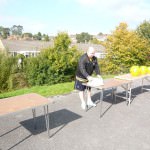 Around each block of cheese was a protective wrapper.

At the end of the conveyor belt was a bar. Krzysztof was required to roll each block of cheese over the bar and onto an adjacent table.

Once he had placed each block of cheese on the table, he would use a knife to remove the protective wrapper.

After that, Krzysztof would pick up the cheese block and carry it roughly 1.5 m to the second part of the production line, shown in the photos on the left.

Working in this way, Krzysztof processed several blocks of cheese per minute.

After working at the factory for about a week, Krzysztof attended an induction course. As part of this, Krzysztof watched a film. 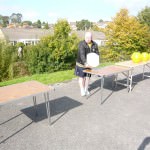 The film covered the history of the firm, and the correct technique for cutting the protective coating away from the cheese.

After watching the film, Krzysztof signed a contract. He then returned to his work.

Several months later, the company provided training in safe lifting techniques. Roughly half a dozen Polish employees attended the course, together with an interpreter.

The training included a demonstration of how to pick up a cardboard box safely from ground level.

Problems with the production line

Krzysztof had to work at top speed, so as to keep pace with the production line process.

No job rotation was offered.

When they did so, Krzysztof would ask if somebody could help him.

But the the manager’s normal response was: “If you don’t like it, there’s the door”.

The beginning of Krzysztof’s back pain

At first, he did not realise that the problem was serious.

His family in Poland sent painkillers. He hoped that these would cure the problem. 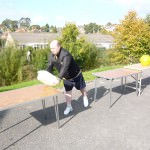 After that, Krzysztof began informing his manager regularly that he his back hurt.

His manager would “laugh it off”, and tell him to work more quickly.

Matters came to a head several months later. Krzysztof started work as normal at 06:00. But by 07:00 his back was so painful that he had to go home.

Krzysztof returned to Poland for treatment.

He never returned to his production line job at the cheese factory.

His back pain continues.

About the injury compensation claim

Together with the Polish interpreter, I went to meet Krzysztof. 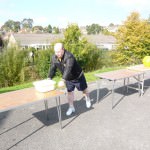 We brought with us some tresle tables. Using these, we set up a production line, in the carpark outside Krzysztof’s house.

To represent a block of cheese, we used a washing up bowl.

After that, we filmed Krzysztof’s movements. The photos show him bending, twisting and liftting repetitively.

Using the stopwatch on his mobile phone, the interpreter timed the complete operation.

Next I arranged for Krzysztof to be examined by an independent neurosurgeon. He also studied the filmed reconstruction.

In the opinion of the neurosurgeon, Krzysztof’s back injury definitely resulted caused his work.

I sent a formal letter of claim to the factory.

Their solicitors denied the claim, alleging that the work operation was perfectly safe. 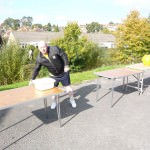 I requested permission to enter the factory for an inspection.

This request was denied.

Court proceedings were then issued.

As part of this process, I sent the opposing solicitors a copy of our medical report.

I also sent them a CD-ROM containing the photos taken during the reconstruction.

We rejected the initial offer and pushed for more. Final compensation was negotiated without a trial being required.

Krzysztof appeared pleased with the result.

To see his feedback in Polish) please click here…

In my opinion, this is yet another case where foreign workers are treated unfairly in the UK. 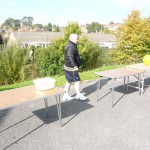 For such workers, threats and intimidation are a depressingly normal part of daily working life.

If one foreign worker resigns because of an injury, there are always plenty more workers desperate enough to take their place.

Many thanks for visiting. I look forward to hearing from you.