One of my most disturbing compensation claims followed an accident at work at a cement factory.

Involved in the accident were 4 workmen. One of them was tragically killed. 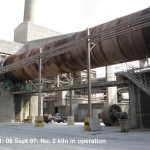 Two of the workmen (including the dead man) were Polish. The remaining 2 workmen were British.

At the time, the cement company operated a big factory at Northfleet, on the Thames Estuary, about 20 miles east of London.

Please click on the photographs, to see larger images of the factory.

About the Cement Kilns

Each kiln was about 200 metres long. While the cement was baking, the kilns rotated slowly, powered by large electric motors.

The external shell of each kiln was made of steel. 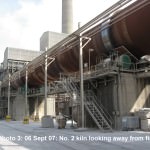 To insulate the outer shell and prevent it melting in the high temperatures caused by the baking process, the kilns had an internal lining.

This lining consisted of fireproof bricks, reinforced by concrete sections.

Originally there had been 6 kilns at the factory. But the company was gradually reducing its operations on site, intending eventually to close down completely. As a result, only 2 kilns still remained in operation.

The System of Maintenance

Although this is difficult to prove, the workmen suspected that the company was no longer undertaking long-term maintenance.

Instead, the company appeared to be relying upon short-term “fixes”, as and when required. 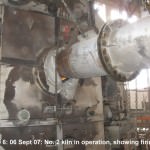 As a result, the 2 remaining kilns were increasingly unreliable. Almost every week, part of the internal fireproof lining would collapse, while the kiln was rotating.

When this happened, the company would shut off the power. Before the lining could be repaired, the kiln would need to cool off. This took roughly 24 hours.

After that, a team of workmen would go inside the still-warm kiln, to install fresh brickwork and concrete.

Breakdowns were always treated as an emergency. So after the kiln had cooled sufficiently, the workmen were summoned urgently to the factory. It was a cold, dark winter morning. 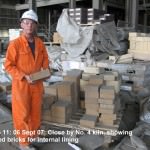 After initial safety checks, the workmen went inside the kiln. The floor inside was littered with collapsed brickwork. The men started clearing up.

Suddenly, without warning, part of the concrete lining above the men collapsed.

The men were showered with large concrete lumps.

Tragically, the falling concrete killed one of the Polish men instantly.

Even more tragically, his son was standing about 1 metre away. He watched in horror, as his father was crushed to death.

One of the British workmen was trapped under another concrete section. He was still alive and screaming for help. 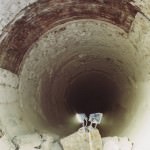 The other British workman desperately tried to drag the concrete away. As a result he suffered a back injury.

From seeing his father killed, the surviving Polish worker was psychologically injured. For a long time afterwards, he felt very uncomfortable being inside confined spaces, fearing that the roof would fall on him. This even affected him while standing in church, at his own wedding, 2 years later.

At the beginning of the case, one of the British workmen showed me around the factory. I took a large number of photographs. As the factory closed down shortly afterwards, these photographs proved to be very useful later.

I put forward compensation claims on behalf of all 3 surviving workmen, and also on behalf of the family of the dead Polish man.

Surprisingly, the opponents denied any responsibility. 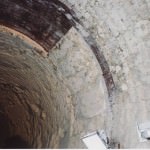 The cement factory had lawyers near London. Their lawyers alleged that no accident of this type had ever happened a cement factory before. For this reason they said the accident was completely unpredictable. They refused to pay compensation.

Because one of the men had been killed, an inquest took place, in Gravesend. At the inquest, a great deal of fresh evidence emerged for the first time, concerning the previous difficulties with the kilns.

Throughout the case, the opponents continued to deny blame. But after a long, hard battle, they finally agreed to attend an out of court settlement meeting.

The settlement meeting was held in London. The meeting lasted all day. The solicitors from all sides attended, together with 3 barristers. Thankfully by the end of the afternoon, suitable compensation was agreed. 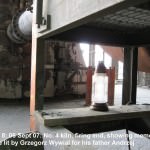 For a long time afterwards, the Polish client with the psychological injury was haunted by what happened.

Only after he and his wife had their first baby, did his psychological recovery really begin.

Slowly, he began to put the tragic incident behind him.

To see the feedback provided by the family of the dead Polish client, please click here…