Cornel is a Romanian carpenter.

At the time of the accident, he was working on a large building site in West London.

Together with an Albanian co-worker, he was constructing a lift shaft. 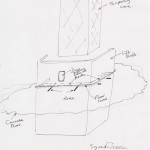 Once the shuttering was complete, then the next stage was to pour in the concrete.

After the concrete had set, then the shuttering and formwork could be dismantled. The pair would then reassemble the same formwork on the next floor up.

In this way, they progressed upwards, floor by floor.

When people are working on a tall building, safety harnesses should always be worn. In fact, it is a legal requirement for the supervisor to check this.

Cornel and his colleague were working many feet above ground level. But despite this, the pair were not wearing safety harnesses.

There was a method statement. But this gave no real guidance about how the lift shaft should be constructed.

Finally the foreman was an aggressive and intimidating character.

He made it perfectly clear that the work should be done at maximum speed. 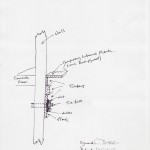 I have dealt with many cases where workers from Eastern Europe live in constant fear of losing their jobs.

Faced with an overbearing boss, many workers rush to complete the work.

In theory, a worker should refuse to start the job, until proper safety equipment is provided.

But in reality, this never happens.

After we started the compensation case, I obtained an expert report from an independent consulting engineer.

The engineer advised that scaffolding should have been provided. That way, Cornel and his colleague could stand safely inside the lift shaft.

Standing on scaffolding boards, they could have safely constructed and dismantled the formwork.

But no scaffolding had been provided.

Immediately before the accident, Cornel was trying to dismantle the formwork from the gap where the lift door was going to be.

As he did so, he lost his footing and fell all the way to the bottom of the lift shaft.

Fellow workers heard his screams for help, and they came to his assistance.

Cornel was taken to hospital, where he was discovered to have suffered serious injuries to his ankle and arm.

During that time, the health and safety manager of his employers paid him a visit in hospital. 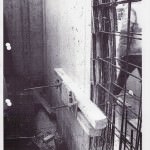 The manager tried to make Cornel sign some papers, designed to make him confess blame for the accident.

Despite being bedridden, vulnerable and on medication, Cornel refused to sign anything.

I visited Cornel in hospital and we prepared a series of sketches, showing exactly how the accident had happened.

The sketches later became important evidence in the successful Health and Safety Executive prosecution of the defendants.

Cornel is right-handed. Our orthopaedic surgeon later confirmed that he would have great difficulty in working as a carpenter in the future.

I made a claim against his employers.

As Cornel was unable to work, I obtained an interim payment. When the money ran out, I asked for a further payment, but this was refused.

As a result we issued court proceedings.

A Defence was received that admitted most of the blame. However the opponents insisted on blaming Cornel in part.

I tried to obtain supporting witness statements. The Albanian co-worker was terrified of losing his job, and so refused to co-operate.

However, a number of other Romanian workers gave statements, confirming that Cornel was a good worker who did not take risks.

In the meanwhile the opponents did their best to attack the claim. 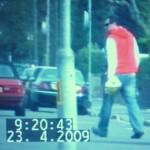 They arranged for a private investigator to follow Cornel, and obtain a secret surveillance video.

The opponents said the video showed that Cornel could walk normally.

When he saw the video evidence, our orthopaedic surgeon Mr Grange was not unduly concerned.

Mr Grange pointed out that Cornel’s shoes were worn very unevenly. This confirmed without any doubt that Cornel walked with a limp.

Secondly the opponents constructed a wooden model of the lift shaft.

They did this to try to convince the judge that the work operation was perfectly safe, and the accident was caused by Cornel’s negligence.

A meeting took place in London with the opposing solicitors, so that we could consider the model.

In Cornel’s opinion, the model was highly inaccurate.

There was an angry mood in the meeting.

Shortly before trial, the opposing solicitors put forward a substantial settlement offer, and this was accepted.

In my opinion, this case demonstrates the kind of “dirty tricks” that defendants often use to escape paying compensation. 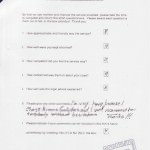 Imagine visiting a sick man in hospital, and pressurising him to sign documents.

Luckily Cornel had the strength of character to resist.

It makes me wonder how many other injured workers would have crumbled under such pressure tactics.

To see Cornel’s comments about the case, please click the image above.